We all loved Millie Bobby Brown as the adorable yet powerful Eleven from Stranger Things, but the actress has come a long way since then. Not only is she all grown up and taking on bigger roles, Brown has also shown us that she’s got a number of other talents to boast off.

Her parents are Robert and Kelly Brown. It has been reported that the family actually sold everything to make the move to Hollywood, in support of their daughter’s career.

The actress has three siblings: Paige Brown, Ava Brown, and Charlie Brown. Paige is an actress-producer, much like her younger sister.

The actress is 16 years old.

As of this writing, Brown reportedly has a net worth of $10 million or £7.8million. This figure is bound to increase, given the trajectory of her career.

When they first moved to the United States, Brown and her family resided in Windermere, Florida. These days, she divides her time between London and Atlanta.

Brown has appeared in a number of shows prior to getting cast on Stranger Things. This includes Once Upon A Time in Wonderland, NCIS, Modern Family, and Grey’s Anatomy to mention a few.

Her film career is just as prolific, having appeared in four movies since 2018!

Who is Millie Bobby Brown?

The actress might be best known for being English, but did you know she was actually born in Spain? Brown was born on February 19, 2004 in Marbella, Málaga, Andalusia, Spain. She is the third of four children and is the second eldest. When she was four years old, the family moved to Bournemouth in Dorset.

Brown was born with partial hearing in one ear and gradually lost all hearing in that ear over the years. Despite this, it’s clear that the disability hardly affected her determination to become successful in Hollywood.

Some of her most notable TV appearances prior to Stranger Things include:

Millie Bobby Brown – Once Upon A Time in Wonderland

It’s a tale as old as time. An actress’ film or TV debut is one of the most important steps when it comes to their careers, and Brown is no exception. She first appeared in the fantasy series Once Upon A Time in Wonderland, where she portrayed a Young Alice. Even back then, she showed undeniable screen presence and talent.

Her short stint on Once Upon A Time in Wonderland was followed by a number of guest appearances in high profile shows, including NCIS. The police procedural drama is one of the most popular on CBS. At only 10 years old, she portrayed the role of Rachel Barnes on the show’s “Parental Guidance Suggested” Episode.

Even as a new face in the industry, Brown was lucky enough to have received appearances in some of the biggest network shows at the time. Such is the case with her guesting on the ABC sitcom Modern Family. Surprised? Her cameo as Lizzie would have been easy to miss if you weren’t already familiar with the actress.

Brown also appeared as a guest star on the Grey’s Anatomy episode called “I Feel The Earth Move.” In the episode, she portrayed the role of Ruby, whose mother fell ill after an earthquake.

Many of our favorite Hollywood celebrities went through difficulties during the early start of their careers. Brown has also had her fair share of rejections in the beginning. Did you know that she almost quit acting after receiving a “no” from the Game of Thrones casting team?

We imagine it must have been hard for the young girl, not just because of her age but also because she really wanted the role. In an appearance on The Tonight Show with Jimmy Fallon, she recalled:

“I then auditioned for Game of Thrones and I got a ‘no’ for that. Then that’s kind of when I was like, ‘Oh, this is really difficult,’ because I guess I really wanted that role.”

Her confidence took a dip after, but we’re sure her fans are glad that Brown did not give up after that audition. Just months later, she received the role that would change her career forever.

After receiving a rejection from Game of Thrones, Brown went on to audition for a new Netflix show called Montauk. Now, getting the role was not an immediate process for the young actress. In fact, she and her family had to wait two months before she even received a callback from the casting team.

Of course, it’s no secret now that she landed that role and the show was later named Stranger Things. For the actress, it was the confidence boost that she needed to feel a renewed hope that she had chosen the right career path.

Despite the fact that she began her career in films not too long ago, Brown has starred in a number of big ticket productions. The first of which is 2018’s Spheres. The actress had a narrator role for the segment, Chorus of the Cosmos.

Did you know that Brown also auditioned for the role of Laura aka X-23 in the 2017 film, Logan? The part eventually went to Dafne Keen, but the actress recalls that it was one of her favorite auditions at the time. This is because she had both of the film’s lead actor, Hugh Jackman, and the film’s director, James Mangold, in the room with her!

Millie Bobby Brown went from narrator to a starring role. In 2019, Brown landed one of the lead roles in Godzilla: King of Monsters. In the film, she starred alongside veterans such as Vera Farmiga, Kyle Chandler, O’Shea Jackson, Ken Watanabe, and Zhang Ziyi. The movie grossed an estimated $386.6 million in the box office. It received mixed reviews, but it showed off Brown’s range as an actress.

It was the biggest role for Millie Bobby Brown 2019, but it is set to be followed by the sequel Godzilla vs. Kong set for release in 2021.

In 2020, we got to see the actress in the mystery film Enola Holmes. It follows the story of Sherlock Holmes’ teenage sister, who went to London in search of their mother who suddenly disappeared. Brown starred alongside some of the biggest names in the industry, including Henry Cavill, Sam Claflin, and Helena Bonham Carter.

Aside from getting the lead role, Brown also co-produced the film alongside her sister Paige. Enola Holmes was released on Netflix on September 23, 2020. It is still available to watch in some regions, so do make sure you check it out!

Now that she’s a teenager, dating issues seem par for the course. The actress has been linked to a number of other actors her age. So, who is the Millie Bobby Brown boyfriend? 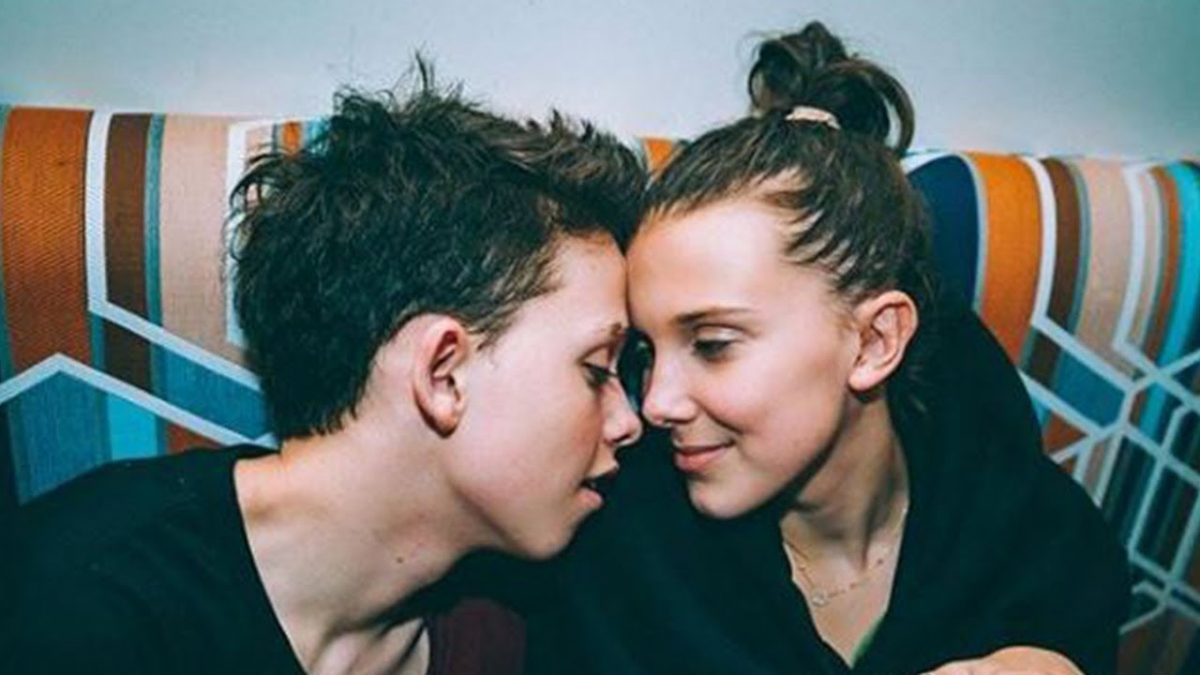 This relationship was one filled with ups and downs, and certainly never lacked in drama. The two met when they were 15 and 14, respectively. The couple first made things official on Instagram, with their every comment on each other’s posts becoming a hot topic for fans and the media.

Then the cheating issue arose. For a while, it seemed as if things were well and truly over for them, but the actress eventually got back together with Sartorius. This surprised everyone, given the reason for their initial split was because he had asked a fan for nudes over on Snapchat.

We’ll chalk this one up to young love, because Brown did get around to kicking him out of her life for good.

The young actress also reportedly dated Joseph Robinson for a while. She had been seen out and about with the son of famous rugby star Jason Robinson. Their relationship was confirmed on social media as well, though this particular post has since been deleted.

These two enjoyed eight months as a couple before eventually calling it quits as well. Since then, not much has been reported on Millie Bobby Brown dating news.

Considering the age gap, many do find the friendship between them as strange. The two first met in Australia and according to Brown herself, they had been texting since then. There is nothing romantic going on, however. Brown insists that they are only friends and that Drake was a great role model for her.

These kids spent a good chunk of their early teenage years together, so we wouldn’t be too surprised at how close they have become over the years. Shall we look at some of Brown’s tight relationship with some of her castmates?

Early on, the chemistry between the two actors had been palpable. They have been rumored to be in a relationship a number of times, so what’s the real score between them? While it is true that the kiss they shared on the show was also Brown’s first kiss in real life, she has clarified time and again that she and Wolfhard are just close friends—nothing more.

Brown and Wolfhard have agreed to stay as friends for the foreseeable future, despite the fact that fans eagerly “ship” them as a couple. While Finllie or Mileven might not be sailing off-screen anytime soon, does the same apply to Brown’s other co-stars?

Here’s another pair with pretty strong chemistry. While fans may be inclined to think that there’s a romantic relationship between the two, Brown is pretty adamant that they are nothing more than good friends.

Sure, they have sweet nicknames for each other, but the dynamic between Brown and Schnapp is more akin to siblings instead of lovers. They are cute together, however!

This is one friendship we consider to be goals. It took two seasons for these girls to be able to work together and we saw just how amazing their chemistry is on Stranger Things 3. The dynamic on the show had always been one girl and four boys, so the introduction of Eleven and Max in the same season was certainly fun to watch. It certainly helps that they are good friends in real life. We’re quite excited to see how their story develops on Stranger Things Season 4.

Like any other teenager her age, the actress has a few social media accounts that she’s active in. In fact, it isn’t unusual for Brown to start Instagram lives to entertain her fans. Millie Bobby Brown rap and Millie Bobby Brown singing are just two of the top searches that people look for, given the amount of times she has treated fans to such.

Aside from the above, you might want to search up Millie Bobby Brown hair tutorials because she’s not one to shy away from creating tutorials as well. Multi-talented? We think so, too.

If you want to check out what she posts on social media, here are the links you’ll need:

@milliestopshate. Her last post on this account was made in January 2019. It was previously deactivated due to cyberbullying.

@milliebbrown. She isn’t as active on this account anymore, though. You’ll find the actress more often on Instagram.

@milliebobbybrown. The actress is most active on this platform and currently has 39.1 million followers.

So, What’s Coming Next for Her?

We will be seeing Stranger Things’ Eleven back on the fourth season of the show. There is no release date for the new season just yet, but many expect it to be some time mid-2021. Until then, expect the actress in the upcoming Godzilla movie. Who knows? We might hear from her again as a producer sooner than expected!

If you’re looking for more thrills while waiting on the latest season of Stranger Things, here are some of the best horror movies on Netflix that you can stream right now.